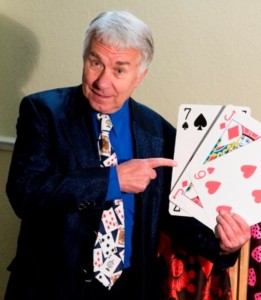 Richard Ballinger’s COMEDY MAGIC SHOWS have been entertaining audiences for more than 25 years making him one of the most experienced comedy magicians in the South West.

His skills as a close up and comedy magician combine to make your guests part of the show with the laughs usually ending up at his rather than the audience’s expense.

Richard’s comedy magic shows can be tailored in length to suit your event and cater for all kinds of audiences and settings.

His comedy magician shows will amaze, mystify and, most of all, amuse you and your guests turning every event into a special occasion. Recent clients include:

Alternatively, email him with your contact details and comedy magic show requirements at [email protected] and he’ll get back in touch as soon as possible.