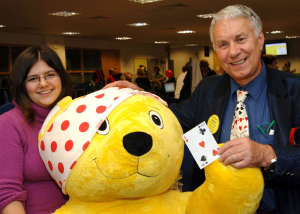 Children’s magic entertainer Richard Ballinger has been entertaining children of all ages for more than 25 years making him one of the most experienced children’s party entertainers in the South West.

His children’s magic shows are suitable for toddlers through to teenagers where he never fails to amaze, mystify and, most of all, amuse his audience – just read what parents think of him on his Testimonials page.

As a professional children’s magician and qualified teacher, Richard knows how to entertain all age groups and use his magic to teach them something at the same time.

Richard can draw on his years of experience as a children’s party entertainer and magician to design a show especially for you and your children.

He is fully DBS checked (formerly CRB), has public liability insurance up to £10m and all his children’s magic shows can be themed and tailored in length to suit your event.

He has a host of additional skills to call upon including balloon-modelling, storytelling, puppeteering and ventriloquism. A small disco and lights system is also available on request.

A typical performance for 2 to 5-year-olds usually involves Richard performing children’s magic tricks based on well-known fairy tales like Cinderella, The Three Bears and The Ugly Duckling.

A show for 5 to 8-year-olds will see him use magic with more audience participation and ventriloquism while he will use more complicated and competitive magic tricks and games for older children and teenagers.

He is comfortable performing in any setting from birthday parties through to family fun days and festivals. Recent clients include:

So if you’re looking at booking a childrens magic show or children’s magician for Bristol, Weston-super-Mare, North Somerset or anywhere in the South West, please Contact Richard on 01934 418184 or 07979 600797.

Alternatively, email him with your contact details and children’s magic requirements at [email protected] and he’ll get back in touch as soon as possible.